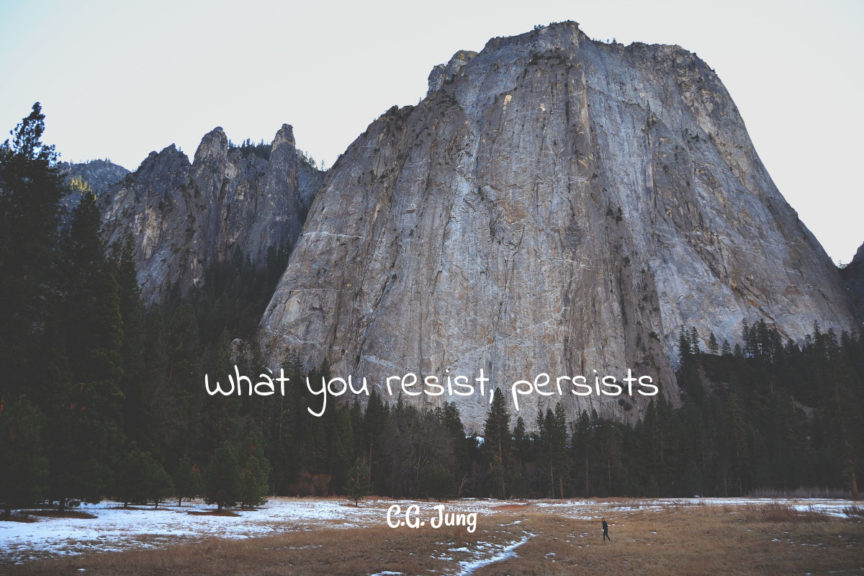 Once there was a young man named Jack who was bequeathed a small portion of land by his father. On the border of  the land was a very large rock. This rock rose straight up out of the ground, taller than a house and stretched the entire length of the property. On the other side of the rock was a town where a person of reasonable talent, who was willing to work hard, could find a well-paying job. The young man built himself a small house upon his land. The soil of the property was rich and Jack was able to grow food and flowers. Jack found a good job in the town and settled down to begin his new life.

As Jack’s resentments toward the rock grew, it seemed like the rock did also. Every day, Jack thought about how much he disliked the rock. Every day, the rock seemed to grow a little.   Eventually, the rock was nearly the size of a mountain, and stretched a mile in both directions from where Jack’s house was. Jack hated the rock by now. It was making it harder to get to his job, and the shadows were shading out his crops. One day, his anger was so great, he kicked the rock as hard as he could in uncontrolled rage. He broke his big toe. The rock shuddered and grew.

After his toe healed, Jack decided he had had enough and was going to destroy the rock. He took all his savings into the town and  brought home a pick axe, jackhammer and dynamite to blow the rock apart. All the dynamite did was blow tiny chips off the rock, which landed in Jack’s gardens and began to grow like mushrooms into new rocks.

“I give up” he said to the rock. And one of the baby rocks disappeared.” You were here first”. *pop* another baby rock disappeared. “I don’t know why you are growing, but you have shown me I can’t get rid of you”. *Pop, pop, pop*; more of the little rocks that had spawned from the dynamite disappeared. Jack was so disheartened, he barely noticed. He sighed a deep, despondent sigh. He was tired and didn’t understand what was going on. Jack went into his house, made himself some supper and went to bed.

In the morning, he went out to find that all of the baby rocks had disappeared except for the one he had been sitting on. A bit disoriented and kind of numb, he went to sit on the one remaining rock. It was actually quite a comfortable seat, and was under his favorite apple tree. He sat under the tree, drinking his tea (with milk), pondering his situation. For the first morning since he could remember in a long time, he didn’t feel hate toward the rock. It was just there. And, apparently, it was not going to go away. “OK” he said to the rock, speaking to it in a normal voice for the first time in months. “What are my options here?” He thought about moving, but he really liked his little house. He liked his job. And who would buy the property shaded by this big rock? He had spent all his money trying to destroy the rock, and couldn’t afford to move, anyway.

Jack decided, at least for the moment, that he would stay where he was and continue to travel around the rock every day to his job in town. He wasn’t sure what he was going to do in the long run, but he was sure he was done hating the rock. It took too much energy and didn’t do any good, anyway. He wasn’t certain, but he thought perhaps, for the first time in a long time, the big rock didn’t look bigger today than yesterday.

Over the course of the next few months, Jack focused on what to do with the shady parts of his garden. With all that shade, he discovered he could grow truffles and delicious mushrooms. He began to notice how fit he was from walking the extra distance to work every day. Although the rock still blocked his view of town, Jack began to focus his attention in the other direction, toward the valley which was full of wildflowers this time of year. Jack discovered he had a reasonably good life, now that he wasn’t focused on the rock. Every morning, he drank a cup of tea and meditated on the smaller rock under his favorite apple tree. Little by little, the rock began to shrink, until it was nearly back to its original size. All the negative energy it had absorbed from Jack’s resentment and hate had changed it, so it would always be bigger than when Jack moved in, but it did shrink. People began to come from miles away to buy Jack’s truffles and mushrooms, which were rumored to be better than any in the land. Jack made so much money, he was able to quit his job in town, and no longer had to walk around the rock every day (although his still did frequently, for the exercise).

Jack grew old in the shadow of the rock. He and the rock even became friends, of a sort. He continued to sit every morning on the little rock that had spawned from his attempt to destroy the big rock. In that peaceful place, it was Jack’s heart that grew a little every day, not the rock.